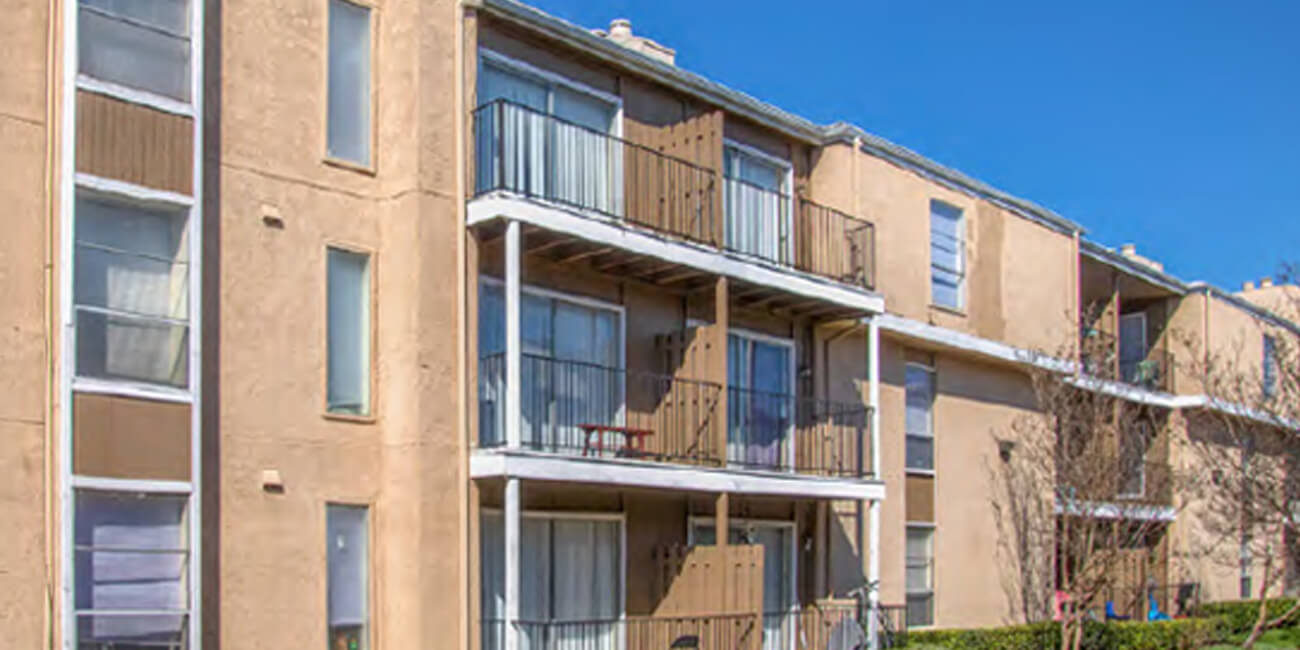 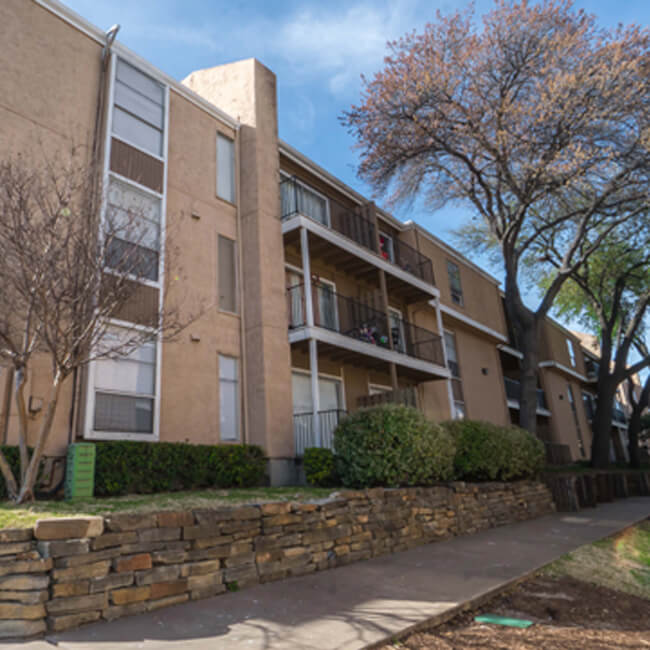 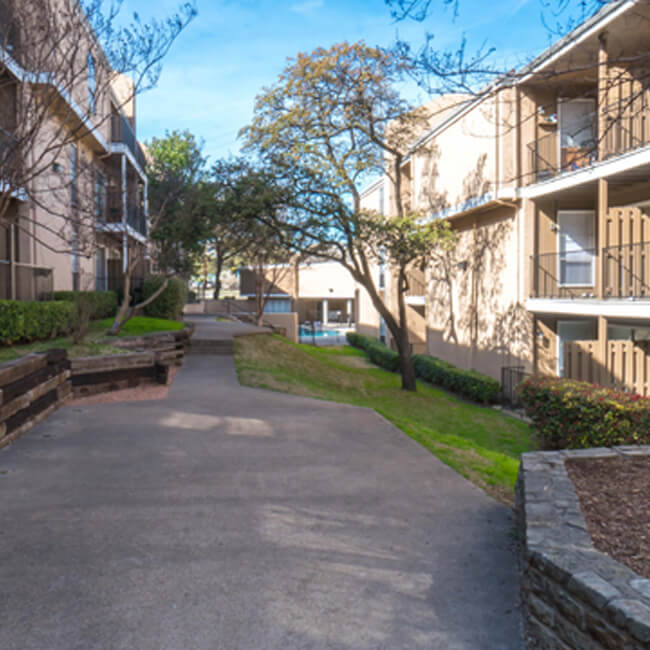 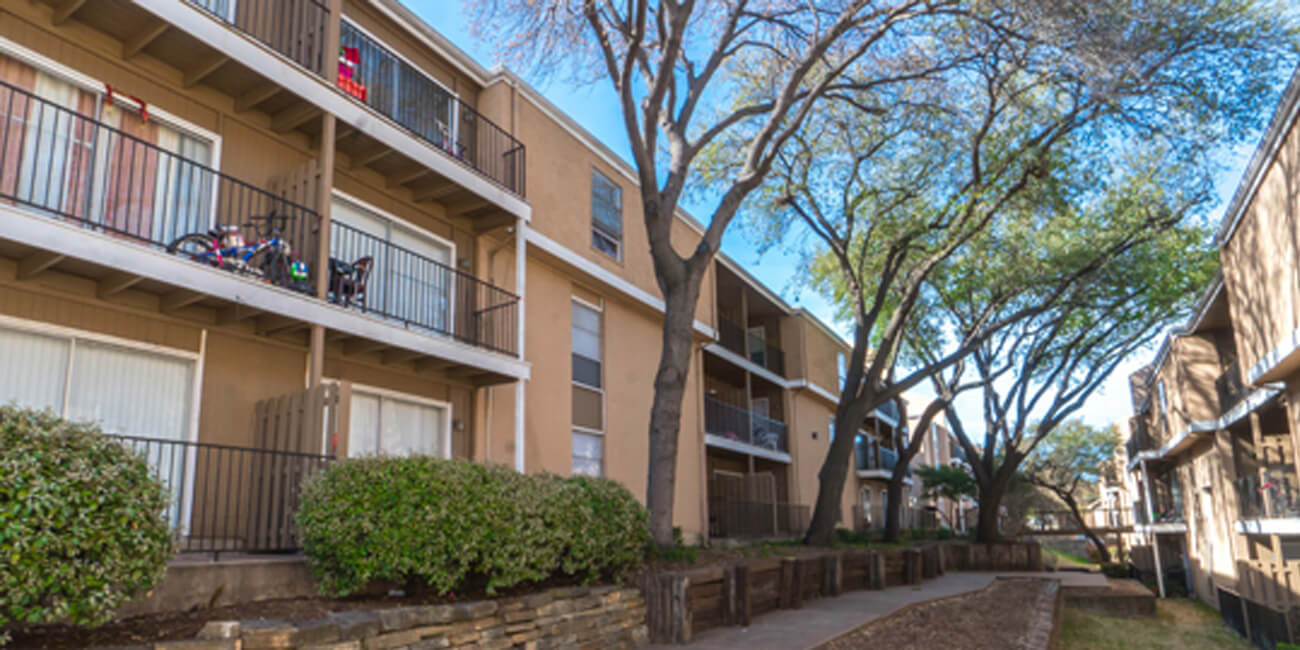 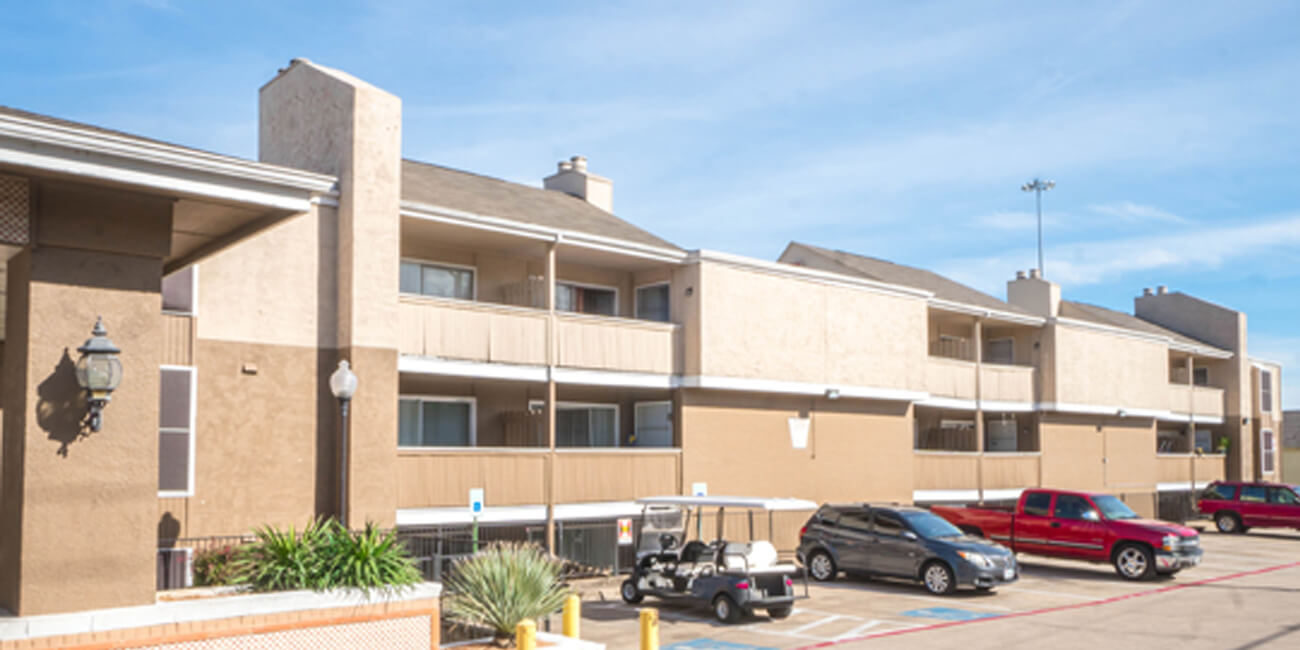 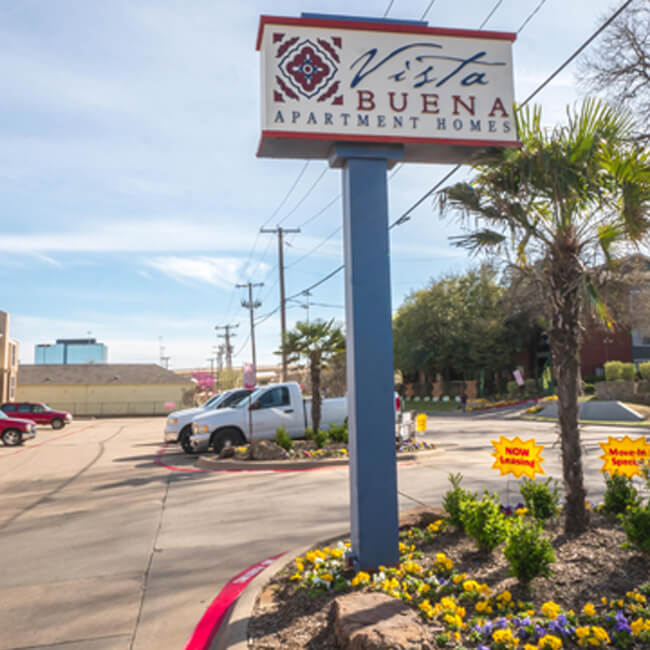 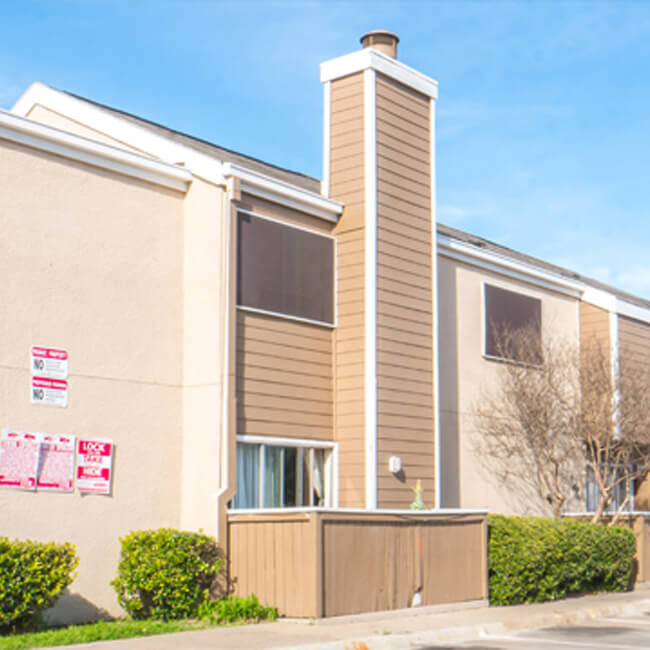 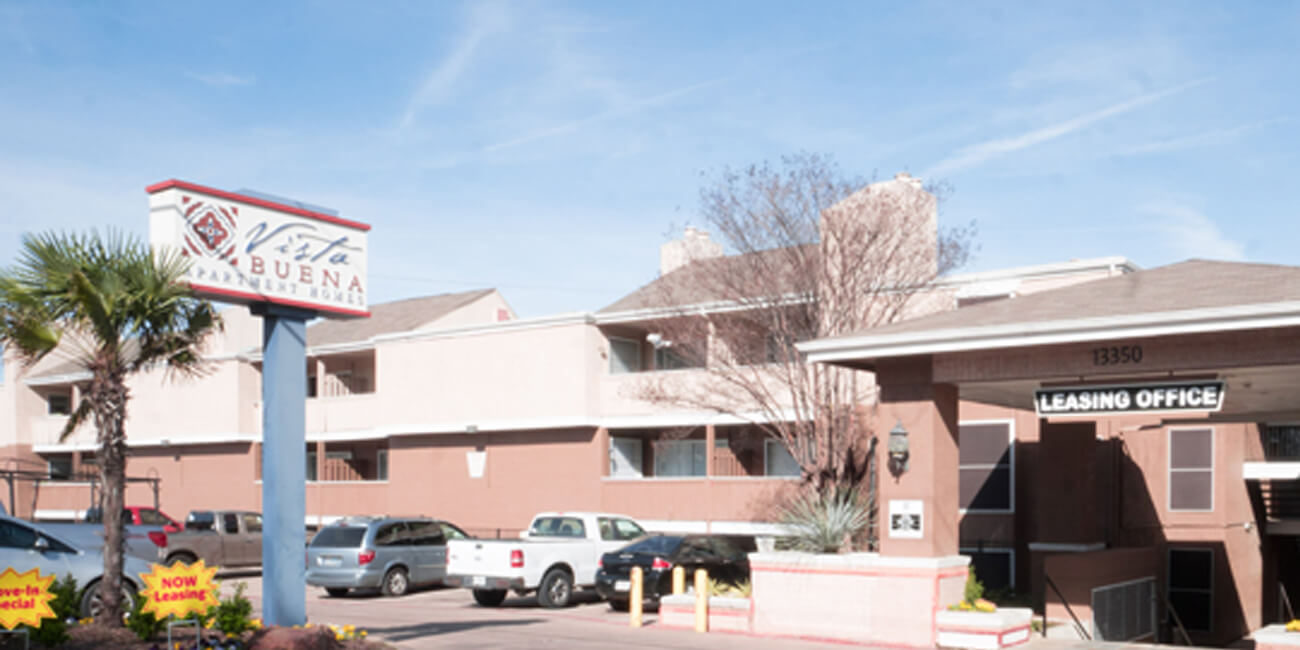 Vista Buena is located in North Dallas near the city of Dallas’s border with Richardson, and is part of RealPage, Inc.’s North Dallas submarket. Per RealPage, Inc., the North Dallas submarket has experienced a +2.3% annual rent increase due to its location in Dallas city limits and the award-winning Richardson Independent School District. Residents of Vista Buena enjoy easy access to U.S. 75 / North Central Expressway, Interstate 635 / LBJ Freeway, and the Dallas North Tollway; State Highway 190 / President George Bush Turnpike is less than 5.6 miles due north of the property.

Dallas continues to thrive, the result of efforts in revitalizing areas in and around the city, and emphasizing walkable neighborhoods, public transportation, faster and easier roadway infrastructure, and urban green space such as Klyde Warren Park. With its central location and time zone, business-friendly climate for jobs and investments, and world-class infrastructure, the Dallas-Plano-Irving MSA is experiencing job growth, adding 61,800 non-farm jobs in the year ending December 2017, the latest month for which the Bureau of Labor Statistics has data. Currently Dallas-Plano-Irving is experiencing a +2.4% annual job growth rate and a 3.1% unemployment rate; this unemployment rate is below the Texas unemployment rate of 4.0% and the national rate of 4.1% for the same data month.

Officially known as the “International Business Capital of North Texas,” Richardson is a dynamic business-based community that enjoys a prime location just north of Dallas and is home to 5,596 businesses employing more than 92,500 people. This represents an impressive 0.84 jobs for every Richardson resident, even more impressive given that Richardson’s population of approximately 110,084 residents includes children, students, retirees, etc. Dallas boasts 52,349 businesses employing 774,569 people, or 0.59 jobs for each of Dallas’s 1,323,651 residents.

Texas Instruments, Medical City Dallas / Park Central, the Dallas Galleria, NorthPark Center, Texas Health Dallas, the administration building for Richardson Independent School District, the University of Texas at Dallas, and Richland College are among the largest employers within a five-mile radius of Vista Buena. The CityLine development, home of State Farm’s and Raytheon’s new headquarters, is just over seven miles northeast of Vista Buena in Richardson near its border with the city of Plano. Other major employment hubs nearby include Telecom Corridor® within the City of Richardson north on U.S. 75, and following State Highway 190 east toward Shiloh Road and west toward Frankford Road, and the Legacy West development (home of Toyota’s new headquarters) less than 15 miles north of Vista Buena. Also toward Vista Buena’s north are The Star in Frisco (NFL Telecom Corridor® 28 Confidential Offering Memorandum team Dallas Cowboys World Headquarters), approximately 18 miles away in the city of Frisco, and Warren Buffett’s Grandscape development less than 18 miles away in the city of The Colony. To Vista Buena’s south are the Dallas Arts District (largest contiguous urban arts district in the country) about 11 miles away, and the Dallas Central Business District with over 135,000 employees is approximately 11.3 miles.

Medical City and the Park Central area employs more than 17,000 people and is within two miles of Vista Buena. Within a two-mile radius of the property, 4,014 businesses provide employment for 69,651 people – this is especially impressive because the population of 65,620 people within this same radius is less than the number of jobs! There is no question that North Dallas offers everything today’s residents require: quality of life, economic potential, business friendliness, and superior infrastructure including easy access to DFW International Airport and Love Field Airport, as well as direct access to local highways LBJ Freeway and Central Expressway.

Quality of life and stellar education are two very important requisites for North Texas residents. Vista Buena feeds into the well-regarded Richardson Independent School District, serving over 38,700 students throughout 54 schools. Richardson High School, one of the choices for Vista Buena residents to attend and the closest geographically, was the 96th best high school in Texas per U.S. News & World Report’s publication “Best High Schools 2017” and earned a silver medal as a result. Niche ranked Richardson High School #7 “Niche Standout High School in Texas” for 2018, which is #1 in the Dallas-Fort Worth metro area. The school is also the 2nd most diverse public high school in Dallas County, per Niche’s 2018 ranks. J.J. Pearce High School, the other high school Vista Buena residents can choose to attend, is very well-regarded in its own right. Richardson ISD distinguishes itself as the most diverse school district in Dallas County as well as Dallas County’s third best school district for 2018 per Niche.

Yitzi’s eye for acquisitions and keen understanding of complex investment strategies serve to keep Ambo at the top of our game. With extensive real estate experience, Yitzi’s ability to “talk the talk” while still relating to laypeople makes him a popular lecturer, and investors quickly learn they can rely on Yitzi’s expertise and trademark honesty. His sincere consideration of our investors’ wishes and concerns ensures that each and every shareholder gets the personal treatment they need to feel secure in their investment.

With nine years of public accounting experience, Jack’s financial/accounting expertise is the backbone of Ambo’s office operations. His dynamic management of the financial and HR departments ensures efficiency on the back-end, promoting a healthy environment conducive to future growth and development. As Ambo’s reach continues to extend, we rely on Jack’s savvy and professional oversight to carry us toward a future of success.

With over a decade of involvement in multi-unit properties, Sam’s insight and experience in recognizing and capitalizing on high-return acquisitions, as well as his property management and financial/banking expertise, have been integral to building Ambo’s impressive portfolio of properties. Once each project is structured properly, it is his hands-on involvement and operational proficiency that ensure that each property is optimally managed to produce maximum returns. With professionalism and passion for each project, Sam continues to be a driving force behind Ambo’s growth and success.